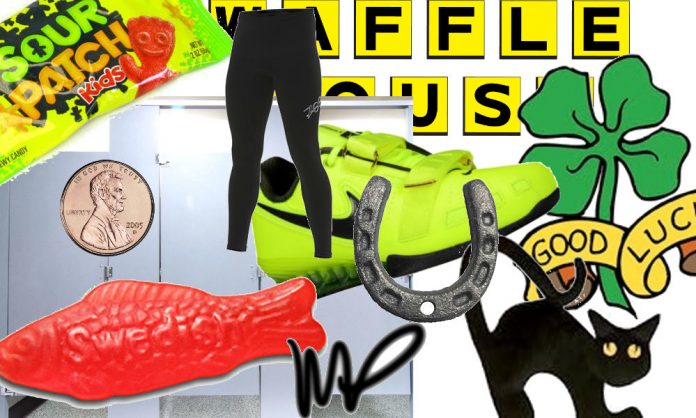 For those who don’t believe in superstitions, following a specific routine or wearing the same clothing can seem really odd. But for the rest, the key to success might rest in eating the same candy at every competition.

We asked some CrossFit athletes what superstitions that had during competitions or while training. Here’s what they had to say.

“My biggest one is my hair…my best friends braids my hair for big competitions and has since college softball. I played softball so I can get into superstitions easily. I used to have a lucky pair of underwear but they failed. So I retired them. During last year’s Open I wore the same tank for every Open workout as it was good luck tank!!!”

“I have a few. I re-tie my shoes twice in warm-up. The only candy I’ll eat in a competition is sour patch kids. I go to the bathroom before I warm up…in training, I use the same stall. I eat Waffle House for breakfast every morning before a competition.”

“I always put my initials right near the starting mat on the floor anywhere before an event.”

“I’m not sure I’d call it a superstition, more like rituals…like how I approach the bar or how I set up for a lift.”

“In any weightlifting event in CrossFit I have to wear my volt Nike Romaleos and volt Nike socks that match. It’s the shoes I was wearing when I won USAW Nationals in 2014 so I feel like they make me lift like a national champion all the time.

Also, Swedish Fish. At every competition.”

“The pair of compression I wear on Day 1 at the Games I wear everyday through Sunday. Also, for a long time I used to pretty much snack on M&Ms and Goldfish during comp weekend…but that was not a good approach.”

“I wear the same shirt for every single Open workout, but that’s about it. Nothing as far as regionals or other competitions though.”

But not everyone has their superstitions…

“Not in CrossFit, but I used to have superstitions when I was a swimmer. I would eat a single grape pez before every race. I had lucky clothes and specific little habits I would maintain before each race. I decided that it was interfering with my performance and they were all dumb so I got rid of them.”

“I am more of a believer that I’m in control of my effort and the rest I leave up to God.”

“I broke that habit a long time ago playing football. It was just one more thing to use as an excuse if something didn’t go as planned.”

So what are your superstitions? Let us know in the comments below!

ABOUT US
The Barbell Spin is a digital publication for barbell-specific sports content covering CrossFit, Weightlifting, Powerlifting and the NPGL. The goal of The Barbell Spin is to become a contributor-based network with a growing roster of writers and premier contributors creating valuable content every day for fans of their respective sports.
Contact us: [email protected]arbellspin.com
FOLLOW US
© 2015 The Barbell Spin