Yesterday afternoon in response to an Indianapolis CrossFit gym’s decision to cancel a workout supporting Pride month, Russell Berger, an employee of CrossFit, Inc., fired off three tweets expressing his viewpoint of the LGBTQ movement. Berger’s viewpoint that “celebrating ‘pride’ is a sin” outraged those on Twitter.

Shortly after his third tweet in which Berger wanted to “double-down” and clarify his viewpoint “since the Twitter mobs are hard at work trying to get me (Berger) fired,” Berger’s tweets were taken down (archived screenshots below). 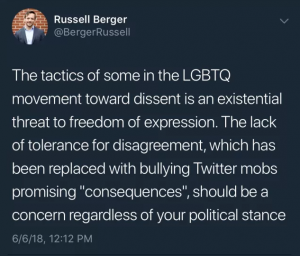 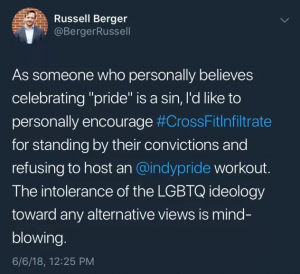 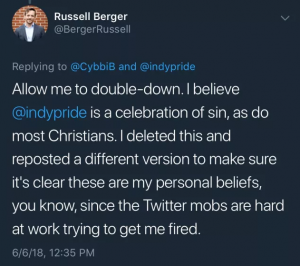 “I am crazy proud of the gay community in CrossFit.”

Later that afternoon CrossFit announced it had placed Berger on unpaid leave while CrossFit’s management conducted its review of the situation. That review did not last long as three hours later CrossFit shared that it had terminated Berger’s employment with the company.

Effective immediately, Russell Berger has been placed on unpaid leave while management completes a thorough review.

The statements made today by Russell Berger do not reflect the views of CrossFit Inc. For this reason, his employment with CrossFit has been terminated.

As an update, I’ve been officially terminated.

According to Berger, he joined CrossFit, Inc. in 2009 and via Twitter labeled himself as Chief Knowledge Officer. CrossFit, Inc., however, has commented that Berger’s official title was only “legal researcher”.

As for the gym in the center of the controversy, CrossFit Infiltrate, the gym officially closed its business last night. Following the tweet storm and national media coverage, employees and members of the gym quit and went to neighboring CrossFit gyms. The owners posted a sign on their doors stating the gym will no longer operate its business.

CrossFit is a diverse community in every way, and that’s what makes us strong. No matter who you are, how you’re built, what you believe, or who or how you love—we are proud of you.