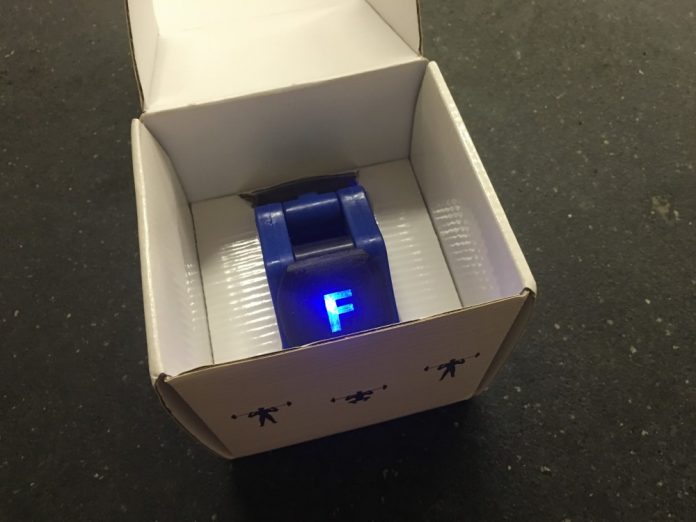 I was given the opportunity to try out the FORM Collar recently after talking with the creator, Scott Mahr. He started a Kickstarter campaign and has showed some impressive videos by James Townsend, Scott Hisaka and Kenny Leverich. These videos featured some impressive lifts coupled with force production charts.

Yes, this video shows Townsend with a max hip drive of 598 pounds! This looks great on a 10-second video, but I wanted to see if it was more than cool technology.

The FORM Collar is a small, black box about 1″ in diameter and 1/2″ thick. The top of the square features an “F” that lights up. More on this feature later. The beta version I received to test was attached to a blue Lock Jaw Pro Collar.

A USB port is on the side of the FORM Collar that is used to recharge it. According to Scott, the FORM Collar has a battery life of approximately five hours. During my testing, I experienced slightly longer battery length. I forgot to charge it overnight and it still held a charge, but died after my first lift. Having a charger in the gym to dedicated to charging the FORM Collar is definitely recommended.

While I was charging the FORM Collar for the first time, I downloaded the app. The app, called FORM Lifting, is available on iPhone and Android devices. The app is very easy to use. It connects to your Facebook account which makes the initial set-up fast. From there, you can enter your height and weight.

Next, you are able to calibrate the device for your specific positions. You can calibrate Oly, Bench and Squat positions. Using a light weight, the app walks you through a few positions (ie bar on ground, at hips, at shoulders, bottom of front squat and overhead).

I forgot to calibrate before using it the first time and had no issues on back squats. My guess is that it might be more important for faster movements such as the snatch and clean and jerk.

Lifting with the Collar 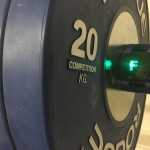 Using the FORM Collar takes a little bit to get used to. It’s not hard to use, but it took me a little while to remember make sure I adjusted the settings when the weights changed or did different movements. After a couple days, however, this became an afterthought.

To calculate the proper amount of force, you must set the total weight that is to be lifted. Fortunately, the app allows you to choose between pounds and kilograms. Additionally, you can set your 1RM for each lift type so that it shows your percentage of 1RM as you set the weight. This makes adjusting the weight very easy, especially when doing percentage work on your lifts. You don’t have to switch back and forth to the calculator each time the weights change. It’s right there in the app!

The main screen of the app also shows the amount of rest time between lifts. While it’s not as large as a wall timer, you don’t have to remember what time you finished your last rep. The timer starts over after each rep. 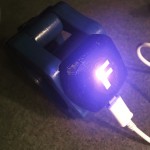 When the collar is not the barbell or not locked, the top of the app is yellow telling you that the collar is not ready. Once it is locked on the barbell, the “F” on the Collar turns from blue to green and the app also turns green. At that point, you can begin your lift.

After every rep is complete, the app updates with that lift’s metrics. It is not limited to single reps either. I did up to 10 reps in a set of back squats and the app captured every lift.

Once a lift has been completed, the app shows the specific metrics for that lift, the previous lift and that session’s average. For power and squat cleans, it gives you your max hip drive, drop time and something called transitional force gap. Also, there’s a graph that charts the barbell’s elevation and the force applied to the barbell. 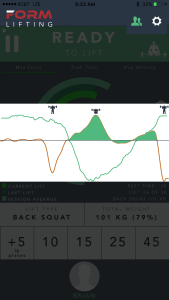 Alright, so the FORM Collar works and it gives you metrics and graphs that look cool. So what? This is the question that I really wanted to answer while testing the FORM Collar. Before using it, I was not convinced that it could be a useful tool for training; something that is fun to try, but would not help training.

I can say that after using it for only a couple weeks it is something that can be a great
addition to your training. While I’m still learning how to best incorporate it into my training (and figuring out what the transitional force gap is), being able to see your force production and how your drop time in squat cleans was awesome. 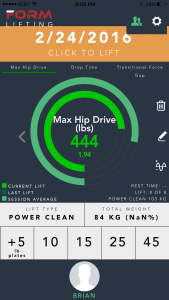 As I trained, I was able to review my lifts and see how my force production was trending during multiple rep sets or during the course of the training session. I think that as this becomes in the hands of more people there will be some benchmarks within each of the metrics that will drive better understanding of your training in real-time. I can honestly see that in the future this could be used to indicate when an athlete should stop lifting or lower the weights and prevent injury.

While I did enjoy the FORM Collar, I did experience a couple instances where the FORM Collar sent crazy data to the app, either while I was walking out a squat from the rack or while re-racking the weights. It’s easy to delete these, but it was a little bit of a pain to go through those misreadings. This is probably something that can be improved with more usage and a non-beta product so I’m not worried about this once in full production. 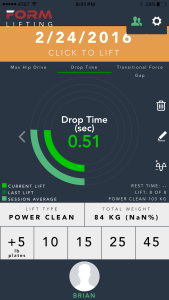 Right now, all of the data is stored in the app. You can recall historical data by clicking on a training day, but it could be very difficult to really see changes over months (or even years) if the data is confined in this manner. I think the FORM Collar becomes a complete game-changer when the data (and graphs) can be exported to Excel or Google Sheets. By doing this you could share the data with your coach (remotely or otherwise) and do more tracking performance trends.

I would strongly suggest buying and using the FORM Collar. I believe it can add another layer to your training that will drive improvements in technique and force production as well as could potentially prevent injury in certain circumstances.

Click here and help bring this product to market.