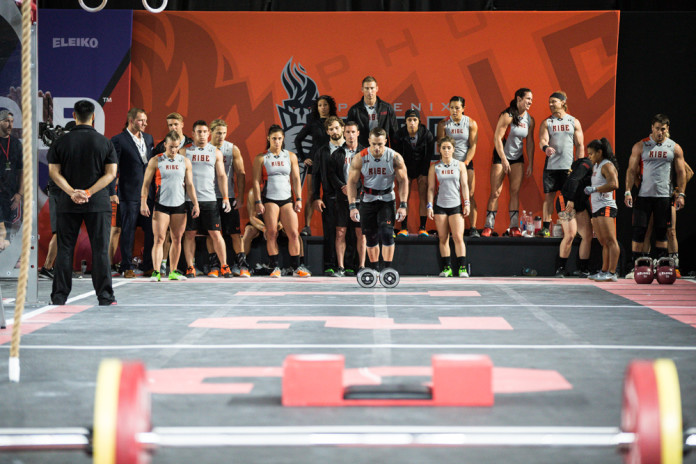 In 6 days, the San Francisco Fire and the Phoenix Rise will take on Everest in the NPGL West Final match. This is a rematch following their regular season battle on June 14 where the Fire edged out the Rise, 18-17, by winning the last four races. Both teams went on to win their next two matches to make it to the playoffs.

San Francisco has looked dominant in its wins against the LA Reign and Miami Surge, but will they be able to hold off Phoenix again? Let’s take a look at this match-up race by race.

1. Partner Forward
A couplet of power cleans and dumbbell thrusters, this could easily come down to the final two female DB thrusters. Neither team has a stand-out female closer. Instead both teams have several women who are fully capable of knocking out the last two dumbbell thrusters. I’m going to give the edge to Phoenix as Danny Nichols and Jessica Phillips will have enough to hold off the Fire. Phoenix 2-1

2. Mirror
Hang snatches, a lot of them, await these teams. Again, I see this one coming down to the women. Between Amanda Goodman, Jessica Phillips and Alexandra LaChance, the Rise appear to have the advantage on paper. Phoenix 4-2

3&4. Women’s Echo
With San Francisco behind early, I expect them to fight back in the Women’s Echo races. The women split the Echo back in June and I can see that happening again. Phoenix 7-5

5&6. Men’s Echo
Phoenix won both Echo races in June, but the final element was 40 hang cleans at 205 pounds. This favored the brute strength of Danny Nichols. Everest, however, ends with 20 overhead squats at 205 pounds. While this will obviously require strength, technical strength will win out. Between Gerald Sasser and Ben Garard, the Fire should have the ability to squeak out wins in both races to tie up the match. Tied 9-9

7. Ladder
Ground-to-Overhead is the recipe in Everest. Strategy will be the key as speed through the ladder will be critical. Do you snatch the lighter weights or go with a clean and jerk from the start? Do you skip any of the first barbells to give yourself time on the heavier weights? Phoenix appears to have more top-end strength than the Fire and should take the total weight. The women of San Francisco lifted more weight than the Rise in all three regular season Ladders. Advantage: Fire. Phoenix 11-10

8. Jack and Jill
Who’s better at handstand push-ups? Phoenix won Race 8 in Kilimanjaro by a safe margin. The only difference between Everest and Kilimanjaro is that Everest has weighted deficit HSPUs whereas Kilimanjaro had freestanding HSPUs. I don’t see anything changing between then and now, so Phoenix will take this one. Phoenix 13-11

9. Women’s Triad
The Fire had a faster time than the Rise in all three regular season Women’s Triad races. I don’t see that changing in the playoffs. It will be close a close race, but Alessandra Pichelli and the Fire will pull this one out. Phoenix 14-13

10. Men’s Triad
I don’t see a much separation in this race until the four 265 pound jerks. Will anyone from the Fire be able to cycle the reps faster than Danny Nichols? I don’t think so. Phoenix 16-14

11. Sprint Relay
With the season on the line, San Francisco coach, Ben Wise, will throw out the bonus flag before the final race begins. Now with four points awarded to the race winner, the Fire will still have a chance to pull out another come from behind victory. This race is going to come down to the final three elements: Burpee-to-Ring 10′, Freestanding HSPUs and three 350 pound Cleans. Both teams looked proficient in those first two elements, so will it come down to the three heavy cleans? If so, who is going to bet against Danny Nichols? Not me. Phoenix pulls out the win. Phoenix 20-15

Final Thoughts
The overall score doesn’t represent how close this match will likely be. Both teams are relatively matched, but in the end the depth and strength of the Phoenix Rise will be the deciding factor in what should be a very exciting battle in the West.