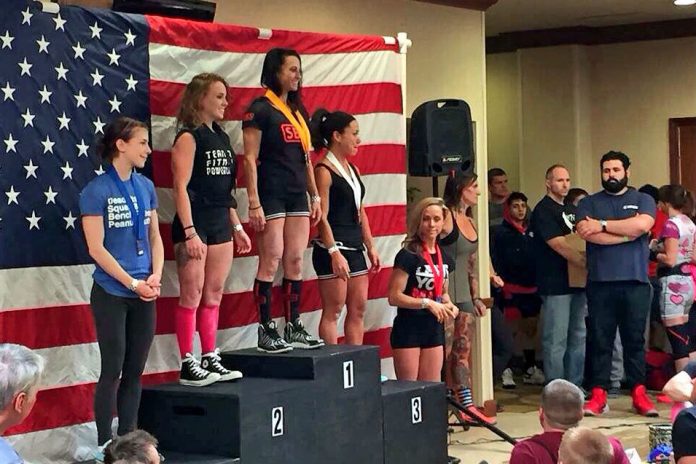 Two weeks ago, I recently competed in the 2015 USAPL Raw Nationals in Scranton, Pennsylvania. It was definitely unlike any other competition I have competed in. The atmosphere of walking into the convention center and the nerves leading up to competition was unlike anything else. Especially when you know there are 1,147 other competitors wanting the same thing as you do. To win.

On the morning of competition my nerves are already going everywhere. I was hungry, and still waiting to be weighed in. I arrived at the convention center around 6 AM, but weigh-­in didn’t start until 7 AM. On top of that, I was the 67th athlete in line to be weighed. That day I weighed in at 44.5 kg, well below the 47 kg weight class. It was not my plan, but considering I had been training at 45.5 kg for the past four weeks I was not concerned the scale.

Things are a whirlwind once you step on the platform. From getting one minute to complete your lift to making a decision on the weight of the next attempt within 30 seconds, everything is quick. I made attempt cards leading up to the event to make sure there were no slip ups at all because if you did not give your next attempt within the 30 second time limit the judges would move you to the next pound.

First lift was the squats. Walking on the platform and seeing all the lights, cameras and photographers…I felt even more anxious. But once the weight was loaded, once I had that weight ready to lift, everyone in the room seemed to disappear until that lift was complete.

I was ready. I was ready to get on the platform and perform to the best of my ability. And that’s exactly what I did. I finished off squats with a 117.5 kg lift. I attempted 125.0 kg, something I have done in the gym multiple times, but just could not seem to stand it up at the meet. Bench stayed at 60 kg and I finished the deadlift at 150 kg. 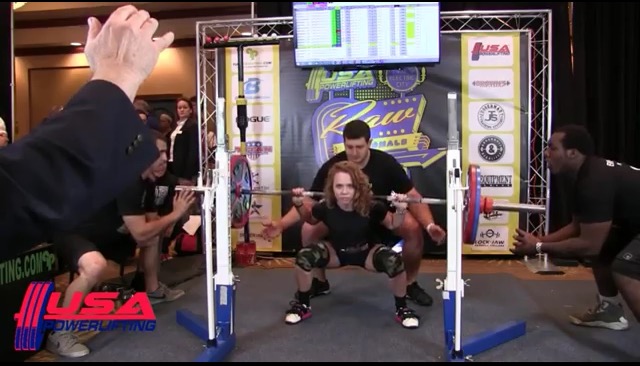 Neither the bench nor deadlift was a PR for me as I have lifted heavier in other competitions. But every competition is different, every competition is a HUGE learning experience. My final deadlift of 157.5 kg was for the win. I was ready to pull the weight and I pulled with everything I had left in me. As the weight started coming up up, all I can remember is telling myself “pull pull pull”. I completed the lift, but was ultimately red lighted due to a technicality. I could have given up and dropped the weight, but I promised myself that I would never give up…no matter what.

Even though I didn’t receive credit for that final lift, I still walked away with my head held high. I had so much to be thankful for. I met so many great people who talked to me and guided me in the direction I needed to go to maximize my performance. At these national-level meets, there are so many strong people, but not just physically – mentally also.

There were certainly a lot of great athletes competing that weekend. I will continue to compete in the 47 kg weight class in preparation for the Arnold Sports Classic in March. It’s time to take everything I learned from Nationals come back more prepared and more ready as a competitor. And I can’t thank those who supported me and continue to support me to work hard in the gym enough. Thank you.

Heather Connor is 24 years old and has been competing in the sport of powerlifting for almost one year (she began on November 1, 2014 to be exact). Over the course of this year, she has managed to earn numerous U.S. and State records in the 47 kg and 52 kg weight classes.