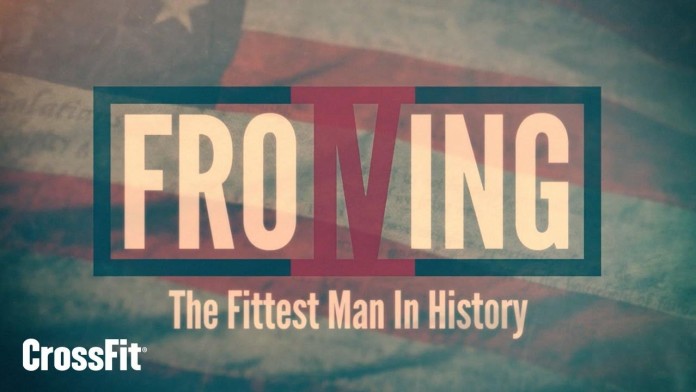 If you follow CrossFit, you have probably seen at least a trailer of CrossFit’s new documentary, Froning: The Fittest Man in History. After two months of special viewings around the country, CrossFit finally released the documentary on iTunes. It is currently the #1 documentary on iTunes and is #6 of all movies available on iTunes. Oh, and it’s the only movie in the top 50 with 5 stars.

We’ve all witnessed Rich Froning dominate his competition year after year in Carson and there have been snippets here and there highlighting his training. This, however, gives the viewers a much more intimate look at Rich Froning, the person. The movie bounces back and forth between Froning’s run at his 4th consecutive CrossFit Games title in 2014 and his personal life.

We get a glimpse into his childhood filled with athletics, daily chores around the house and youthful antics. It is obvious that Froning has been active since he could start crawling. The interviews with his mother and sister provide a lot of perspective of why he like he is today. It was interesting that Rich Froning, Sr., was almost entirely absent from the film. Not sure if that was his choosing or that of Heber Cannon and team.

Just like other CrossFit films, the competition segments are filled with intensity, emotion and convey the passion on the floor. There’s nothing different from a 10-minute short video on CrossFit’s YouTube site, except it’s much longer and tracks Froning’s entire 2014 CrossFit Games experience. From the destruction that the Triple 3’s to missing the final heat of the Speed Clean Ladder, the film shines light on how close it really was to not making it four titles in a row.

CrossFit does an excellent job capturing Froning’s emotions as he thinks the CrossFit Games are slipping away this year…until he advanced to the semi-finals of the Speed Clean Ladder. He admits that he thought he was done right before Dave Castro called his name. Even though he missed the finals and took 9th in that event, he knew he still had a chance.

As the movie bounces between the competition floor and Froning’s personal life, the most touching moments were when he and his wife, Hillary Froning, discuss their struggles with starting a family and the eventual joy (and whirlwind) that came through adoption. Of course, the mood is lightened when Rich attempts to change his first poopy diaper.

In the end, the documentary was everything you would expect from CrossFit HQ. The cinematography is excellent. The story is captivating and draws you in to both the competition and Froning’s personal life. The only criticism is that it came out after the 2015 CrossFit Games, but it’s a story that will be timeless…because Froning is The Fittest Man in History.