We took all of the men who have currently qualified for the 2016 CrossFit Games and stacked their regional performances against one another to see what to expect in July. Here are 5 things to keep in mind as we head into Carson. 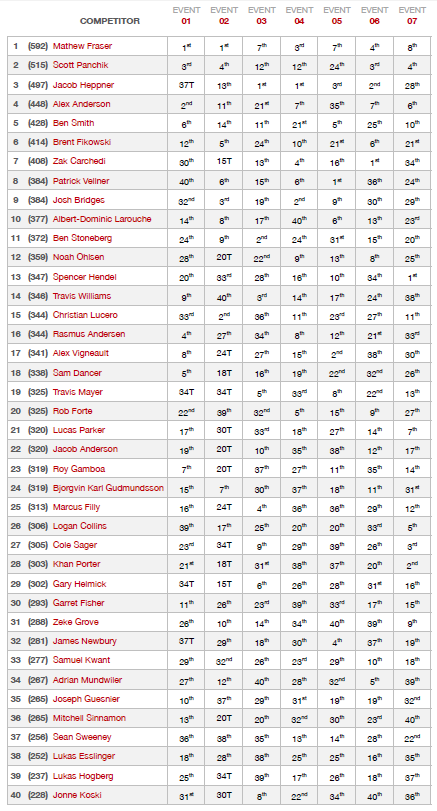 1. Can Anyone Stop Fraser?

It looks like getting 2nd two years in a row at the games is not sitting well with Mat Fraser. At this point it looks like he’s on a mission to make sure that doesn’t happen again. Fraser is the only man to have all top 10 finishes, and all of his competitors also have an event finish outside of the Top 20.  The points gap between Fraser in 1st and Scott Panchik in 2nd is a whopping 77 points.

The Central Regional carries a reputation for being the toughest to qualify on the men’s side and this leaderboard proves it. Four of the five men that qualified from the Central Regional finish inside the Top 10 overall. Scott Panchik, Jacob Heppner, and Alex Anderson all from the central regional finish 2nd, 3rd, and 4th respectively. Expect all three of these men to mimic this once they get to California.

3. Living Up to Expectations: Smith and Ohlsen

Both Ben Smith and Noah Ohlsen are going into the 2016 games with high expectations. Smith is the 2015 CrossFit Games champion and Ohlsen is the 2016 CrossFit Games Open victor. When their regional performances are compared side-by-side to their opponents’ they do not place as high as expected. Smith finishes 5th overall and Ohlsen ends up in 12th, but the Games are very different from Regionals, so let’s hope they can prove their championships aren’t just a flash in a pan.

Jacob Heppner is the only man to have four Top 3 performances in this combined leaderboard. He narrowly missed beating Scott Panchik in both this leaderboard and the 2015 and 2016 Central Regional due to considerably low finishes in a couple of events. If Heppner can continue knocking events out of the park and keep from striking out in other events he might just earn himself a podium spot this July.

Fraser is now 100% dedicated to training and has a chip on his shoulder from the 2014 and 2015 CrossFit Games. It might take a miracle to keep him from taking the gold this year. Ben Smith didn’t make a lot of noise at regionals in 2015, but came in and dominated at the games.  Expect to see him in contention as he defends his title. Panchik, Heppner, Josh Bridges, Ohlsen, and Bjorgvin Gudmundsson, have all finished in the Top 10 at the games before, and based off their regional performances this year should not be different

Above all, these results indicate that the veterans of the sport are the top contenders heading into this year’s games. Mat Fraser may look like a shoo-in to stand atop of the podium, but the same could be said of the 2015 CrossFit Games where he came up short.