Saturday at the East Coast Championships showcased some of the best athletes in functional fitness. Athletes such as Mat Fraser, Noah Ohlsen, Sara Sigmundsdottir and the 2015 Fittest on Earth, Katrin Davidsdottir. The four-event competition was full of excitement from start to finish.

Mat Fraser started off the competition was a blazing 2:43 Amanda in Event 1, a full 13 seconds ahead of Noah Ohlsen who took second place. Cole Sager took 3rd with Cody Anderson following him in 4th.

The second event was a clean and jerk round robin that gave each athlete center stage. The event was high pressure as one mistake equaled elimination. There were no second chances so the athletes couldn’t miss. In the finals of the event, each athlete had two attempts. Jeff Evans took the event with a 380-pound clean and jerk. Evans attempted 405-pounds on his second attempt but wasn’t able to catch the clean well and couldn’t stand up.

Big Fat Frelen stood in the athletes way on the 3rd event,  a nasty combination of Helen and Fran while utilizing the TrueForm Runner. Noah Ohlsen took first place while Mat Fraser took 3rd place. This narrowed the gap a little, but Fraser held an 18-point advantage heading into the final event.

The final event was an elimination style event featuring bar muscle-ups, power cleans, front squats and push jerks. The 3 round event eliminated the two slowest athletes each round culminating in a 4-man race. In the final round, Mat Fraser showed he had the most in the tank as he crushed the barbell complex and cruised past Ohlsen who led after the bar muscle-ups. Fraser secured first place and repeated as ECC champ. 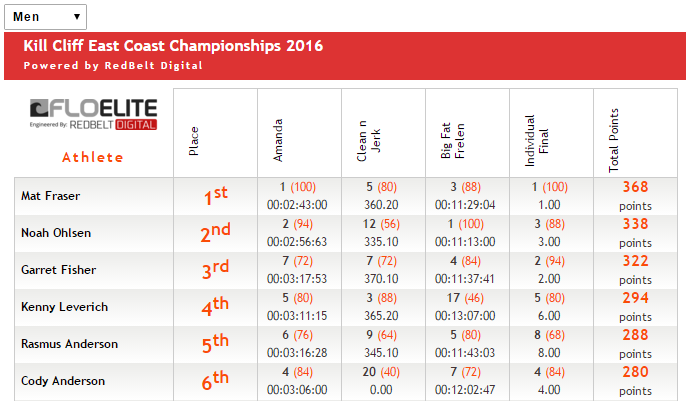 On the women’s side, Maddy Myers came out strong winning Amanda. Myers suffered rhabdomyolysis during Murph at the 2015 CrossFit Games, but she showed she has fully recovered and will be ready for the 2016 season. Sara Sigmundsdottir finished in 2nd place and Tasia Percevecz came in 3rd.

In the clean and jerk event, Taylar Stallings showed her raw power as she was able to get 260 pounds overhead. Myers lifted 255 pounds, showing her weightlifting prowess.

While Myers was in first place heading into Big Fat Frelen, Sara Sigmundsdottir was ready to make her statement. In the third heat, Sigmundsdottir blazed through the TrueForm Runner, chest-to-bar pullups, kettlebell swings and thrusters on her way to first place in the event. Myers struggled with the run portion of the event and dropped to second place overall after a 13th place finish in the event.

With a 26-point advantage heading into the final, Sigmundsdottir just needed to make it past the first elimination. She ended up doing so and secured first place in the competition. Maddy Myers again showed her strength as she moved the barbell efficiently to take first place in the event and take 2nd place overall. Tasia Percevecz, coming off a great showing at Wodapalooza, took 3rd place. 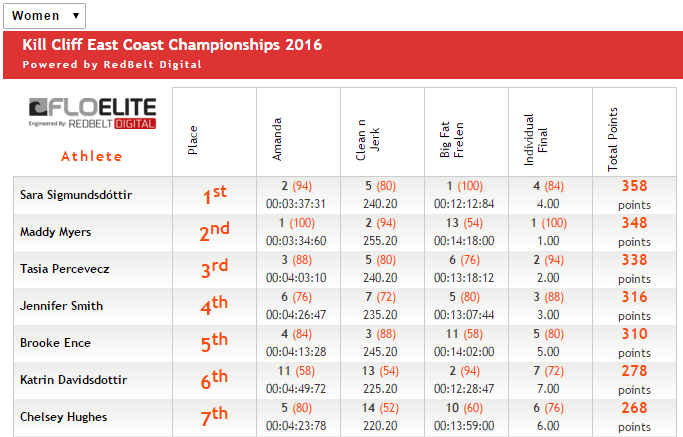 The Super Team competition is Sunday, beginning at 10:00am Eastern. Here is the link to the live stream on UltraSport.tv: