Back in the 2015 Regionals, the first workout was Randy, 75 snatches for time. Fast forward back to the present and 16.3 was basically Randy with 3 bar muscle-ups thrown in there for fun. On top of that, instead of a 2-minute workout, make it 7 minutes and you have a workout that requires tests grip strength, aerobic capacity and mental fortitude to keep going when your body just wants to stop.

In 16.3, Sam Briggs destroyed the rest of the women’s field by completing 158 reps, over 12 rounds of 10 power snatches and 3 bar muscle-ups in 7 minutes. Her next closest competitors, Michele Letendre and Jamie Greene, were 11 reps behind Briggs finishing with 147 reps.

All three athletes start the first round completing all 10 snatches in 17 seconds. Ence follows this up with 3 snatches in 8 seconds while Briggs and Webb take 10 seconds. Round two is nearly identical with all three athletes within one second of each other. But this is where Briggs begins to separate herself from Webb and Ence. As you can see in the chart below, Webb and Ence begin to start losing time compared to Briggs in the third round and basically continues until each athlete hits those last seconds where they push it a little extra. 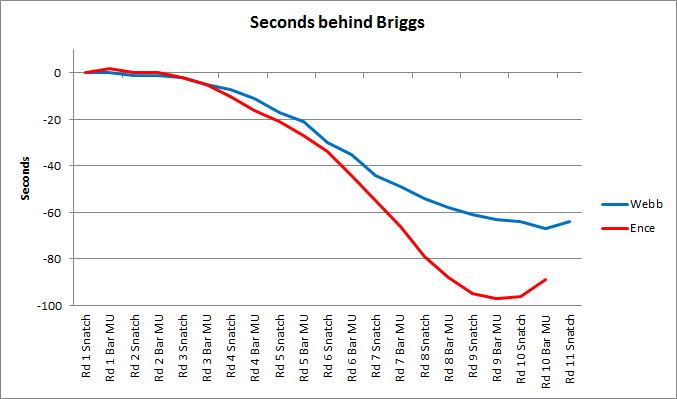 The next chart takes a look at the number of seconds each athlete took to complete each full round. Briggs is able to maintain under rounds under 35 seconds for the first 7 rounds. Webb only held that pace for 3 rounds and Ence lasted 2 rounds before dropping her pace. Briggs only had one round longer than 40 seconds, round 11. 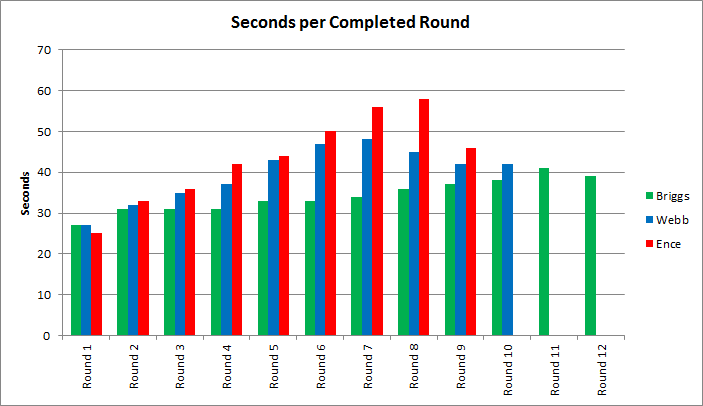 When looking at the time to complete the snatches each round, Briggs held a very consistent pace while Webb and Ence were unable to maintain pacing. Interestingly, both Webb and Ence improved their snatch splits their final three rounds. 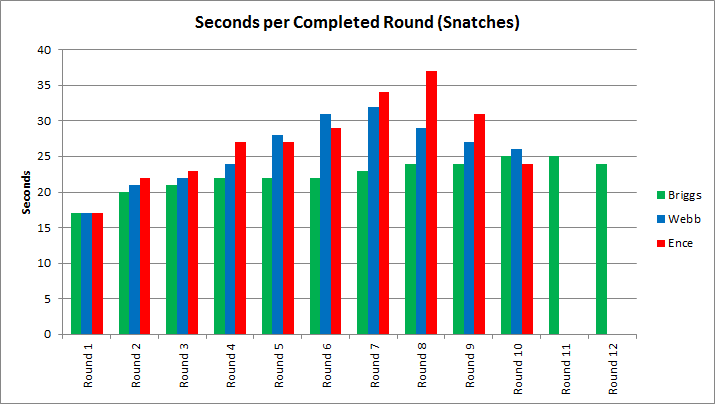 When watching the videos, it is very noticeable that Briggs looks the most comfortable throughout the 7 minutes on the bar muscle-ups. Webb pauses at the top of her reps and Ence is seen with her stomach on the top of the bar before pressing out. Briggs, on the other hand, does not pause at the top and reaches full press out in one fluid motion.

This is very evident when looking at the time taken to complete the bar muscle-ups each round. Ence has several rounds above 20 seconds each while Briggs is near 10 seconds each round and does not have much of a drop off until rounds 11 and 12. 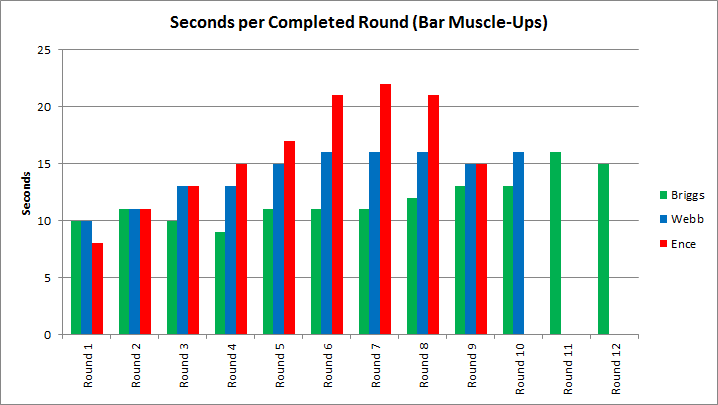 While Castro thought that the first two workouts of the Open required an engine, 16.3 required the ability to regulate heart rate and not reach their anaerobic threshold for as long as possible. We saw Nick Paladino do it in the Open Announcement around the 3:00 mark and the same was true for Kara Webb and Brooke Ence, especially compared to Sam Briggs.

Below are the three videos from 16.3.