There has been a lot of talk about which regions are the strongest or hardest in the CrossFit Games season. It’s a great topic to debate since there it can be argued any number of ways. The discussion was brought up by Blair Morrison and Ben Alderman on the Beyond the Barbell podcast, specifically whether the Northern California region is getting passed up by other regions by sheer population size.

While this article is not looking specifically at that question (maybe in a future analysis), it does illustrate how many different methods one can evaluate how strong a region is. Today, however, I wanted to look at where the Top 10 finishers at the CrossFit Games from 2012-2015 have come from. The analysis does not show trends, nor does it specifically speak to how difficult it is to make to Regionals or the Games, but it does give some indication of where the best of the best athletes reside.

Six regions (Africa, Asia, Canada East, Canada West, Latin America and South Central) have not had an athlete who has in the Top 10 at the CrossFit Games in the last five years. 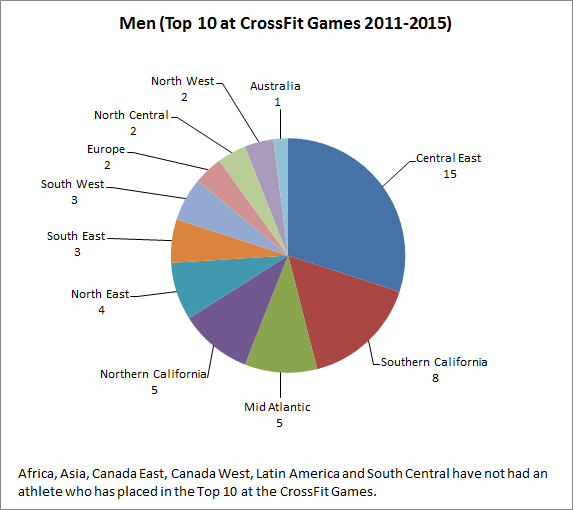 On the women’s side, Southern California leads the pack with 11 Top 10 finishes, however, six of those came from 2012 and 2013. Europe is in second with eight Top 10 finishes. Europe had three in the Top 10 in 2015 and four times in the last five years the winner has come from the Europe region (in 2014, Camille Leblanc-Bazinet won with Annie Thorisdottir, from Europe taking 2nd).

The women’s Top 10 finishes are much more spread out across the regions compared to the men. Only three regions (Africa, Asia and Latin America) have failed to have an athlete make the Top 10 at the CrossFit Games.

Of the 50 available spots for Top 10 athletes over the past five years, 33 women have cracked the Top 10 and no woman has made an appearance in the Top 10 more than three times. Annie Thorisdottir, Camille Leblanc-Bazinet, Julie Foucher, Lindsey Valenzuela, Sam Briggs and Valerie Voboril have been in the Top 10 three times. Similar to the men, though, only 11 women have finished in the Top 10 multiple years. 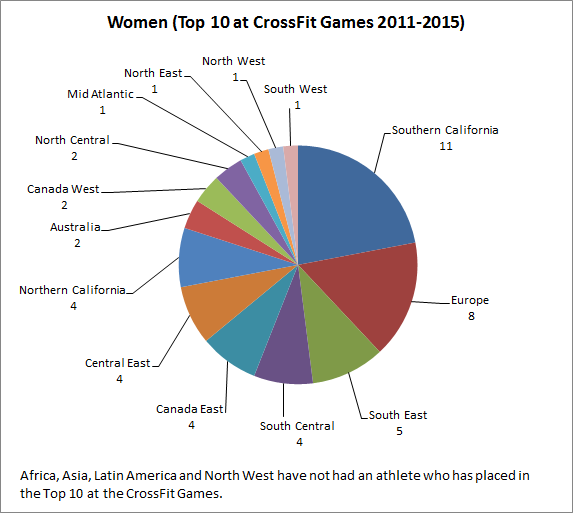