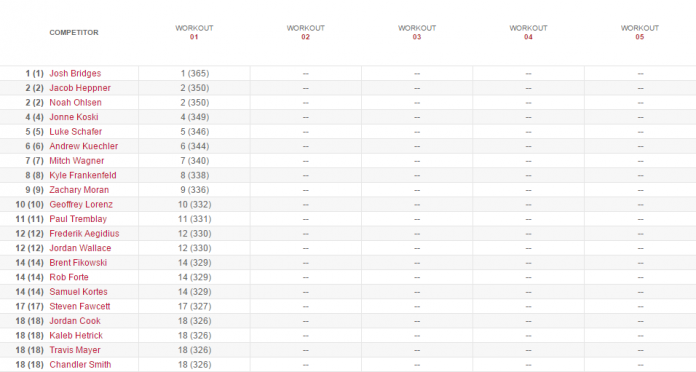 We’ve already looked at the women’s side for 16.1, so let’s take a look at the men’s side. There is quite a bit more uncertainty for the men compared to the women. Only three athletes from the 2015 CrossFit Games were top 10 worldwide. Six of the top 10 have never been to the Games. And the man standing on top didn’t go to the Games last year, but is fired up this year ready to get back…and that is Josh Bridges. Bridges posted 365 reps, surpassing Jacob Heppner and Noah Ohlsen’s 2nd place finish by 15 reps!

Before we get into some of the details on the men’s side, the big question is always, “how did Froning do?” Well, he completed 320 reps, good for 52nd worldwide. His team, CrossFit Mayhem Freedom is sitting in 1st place in the Central East and 11th worldwide.

Of the 40 men who competed at the 2015 CrossFit Games, seven did not submit scores for 16.1. Graham Holmberg, Ben Garard, Chad Mackay, Neal Maddox, Jon Pera, Joe Scali and Kevin Simons did not post a score. Additionally, Chad Cole did post one rep, but had already indicated he would not be competing due to an injury.

At the top of the leaderboard, only four men from last year’s Games sit in 1st place in their respective regions (Jacob Heppner, Noah Ohlsen, Jonne Koski and Jordan Cook) and only 24 are in the top 20 in their regions. That leaves 8 athletes outside looking in, but with four weeks left in the Open, none of the athletes are out of striking distance. Julian Alcaraz is the furthest back in his region sitting in 55th. With at least four scored events remaining, there is plenty of time to get back into a qualifying position.

It’s only been one workout, but it looks like the men’s side will be very competitive this year. Should be exciting.