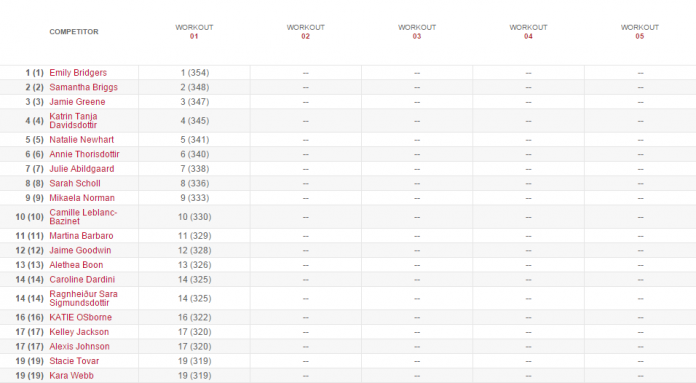 With 16.1 being the longest workout in CrossFit Open history and with a new Open movement – the overhead lunge, there were not too many surprises this week. Before we get into the results, here are the women from last year’s CrossFit Games who did not submit a score.

Of the 36 2015 CrossFit Games athletes who submitted a score, only six fell outside the top 20 in their regions. Lindy Barber, who sits in 47th in the Central East, is going to be on CrossFit Mayhem Freedom this year. Barber commented on Instagram that she avoids overhead lunges in training to protect her back, but was happy with her score and that her back was fine after the workout.

All done with 16.1! It went Way better than I thought it would considering that I don’t do overhead walking lunges to protect my back. WOD is over, and back is totally fine ✅✅ onto 16.2! @tryabouttime #crossfitgames #crossfit #crossfitopen2016

The other five women (Whitney Gelin, Tia-Clair Toomey, Dani Horan, Sammy Wood and Elisabeth Akinwale) are all close enough to their region’s cutoff that no one is at serious risk of missing the cut, especially with four workouts left.

On the other side of the spectrum, 18 women from last year’s CrossFit Games finished in the top 3 in their region and 7 women lead their respective regions.

One of the unfamiliar names at the top of the leaderboard is Jamie Greene. Greene, residing in Africa, finished 1st in the Africa region in the CrossFit Open last year. However, she competed on CrossFit Yas’ team at the Meridian Regional. CrossFit Yas finished 2nd at Regionals, but was disqualified when another teammate, Tamarind Robinson, failed to meet the team eligibility requirements.

Also, in the top 10 worldwide is Sarah Scholl. You might remember her from a recent interview on The Barbell Spin. Scholl sits in 8th worldwide and is in 2nd in the North East region, behind Katrin Davidsdottir.