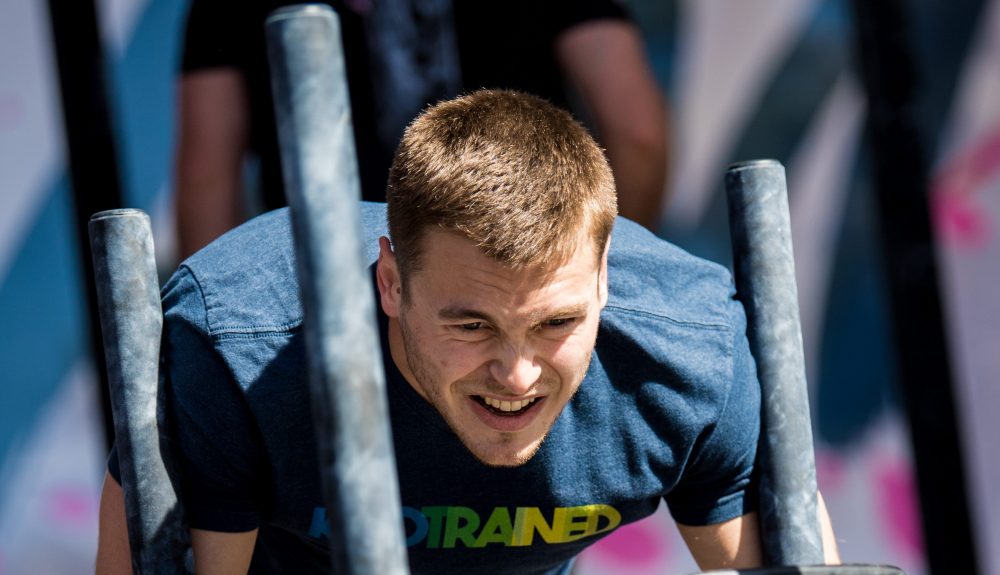 Streat Hoerner surprised a lot of people when he finished in 2nd place at the stacked Central Regional last year. Hoerner would go on to finish 14th at the 2017 CrossFit Games in Madison, Wisconsin.

And earlier this month, Hoerner showed his 2017 success was not a fluke after winning the Elite Men’s division at Wodapalooza. We caught up with Hoerner following his WZA victory to find out what the last year has been like.

The Barbell Spin (TBBS): 2017 was a break-out year for you in CrossFit, but you’ve been climbing up the Open leaderboard since 2014. How did you get into CrossFit and what were you doing before that?

Streat: My mom actually is the one who got me into CrossFit. I had just graduated high school so I was done with sports (football mainly). I still was working out but it was mostly just typical bodybuilding routines. She would come home every night and tell me all about this new fitness program she was doing and finally dragged me into the box with her one day. The very first workout I did kicked my ass, but I was hooked.

TBBS: Speaking of your improvement year after year, what would you attribute to constantly improving?

Streat: I know this is pretty cliche but it’s just a lot of hard work. Consistent hard work more specifically. Also doing things you don’t want to do, over and over. And having the best training partners to do it with.

It’s hard to find the words to describe how I am feeling. This past weekend was absolutely incredible. It was the culmination of years of hard work and sacrifice. 4 years ago I placed 8364th in the open. This year I am going to the Crossfit Games. Hard work does pay off. I could not have done this without the incredible support system around me. There are entirely too many people to thank but I’m going to do my best. Thank you to all of my family and friends that sent encouraging messages throughout weekend. Thank you to @crossfitrestoration @crossfitdubuque and @crossfitkilo2 and the entire communities within them. From my first day of crossfit until now, the gyms that have been apart of it. Thank you to Phil Gothard @just_aus @lukeschafer9 @kindalikabigdyl @chase_bushaw for being some of the most important parts in my evolution as a crossfit athlete. Thank you to @boxstarapparel for the support and believing in me. Thank you to Dan Johnson and @alix_beau for making sure my body was in tip top shape. Finally and most importantly, thank you to my parents. Thank you Sandy Hoerner for dragging me in to that crossfit gym 4 years ago and supporting me endlessly ever since. #GamesBound @crossfitgames

TBBS: At what point along your journey did you have the goal of making the CrossFit Games?

Streat: Once I met my goal of qualifying for regionals I think my aim automatically shifted to qualifying for the CrossFit Games. It was just the next logical step for me. I don’t think that I ever really voiced it much, but deep down that was always the goal.

TBBS: Following your rookie debut at the Games, what has this off-season looked like? How has it differed from last year?

Streat: Qualifying for the Games has allowed me a lot of opportunities to travel which has been very cool. I also just graduated from the University of Iowa last spring so I don’t have to worry about school work and classes anymore. This has been a huge stress reliever, and allowed me to focus on other things such as dialing in my nutrition and recovery. Training has looked pretty similar to last year, I just have a lot more time to do it now.

Having a blast @thewodapalooza with the crew. 1 more day to go, time to finish strong!

TBBS: Congrats on your win at Wodapalooza! How does this win help you as you head into the 2018 CrossFit Games season?

Streat: Thank you! It was a nice test to see how I was improving in the offseason against some great competition. I was able to take away some important things and identify some weaknesses, but it definitely built some confidence heading into the season. It is also important to remember that everyone is at a different stage in their training right now, so in the big picture of the CrossFit Games season it really doesn’t mean that much.

TBBS: Now that you’ve been to the Games, do you feel any added pressure this year to make it back?

Streat: I think anyone that anyone who has made it to the Games feels some sort of pressure to make it back. For me personally the most pressure I feel is from myself. I have an awesome support system that would stand by me no matter what the outcome of the season is.

TBBS: If you were to give someone who just started CF and wanted to make it to Refionals or the Games, what advice would you give them?

Streat: 1. Work hard every day. 2. Hammer your weaknesses. 3. Stop comparing yourself to the things you see on social media. You will feel like you are on an impossible journey. All that matters is if you are getting better than you were the day before.