This year is going to be completely different from the previous CrossFit Games. With nearly 150 men and women competing this year, along with several cuts to the field along the way. And while we expect the top athletes to be unaffected by the changes, there will still likely be some impact.

One of our readers, Cameron Tally (@texastally in Instagram) looked at last year’s events and applied this year’s scoring tables for the men’s competition. Of course we don’t know exactly how/when the cuts are going to occur, it does highlight how athletes could be affected by a slow start.

In his analysis, Tally applied the scoring tables over the course of last year’s 14 events. The field and scoring table adjusted every two events with the assumption that all of the athletes would have finished in the top 40 when the field was larger.

Here’s what we found: 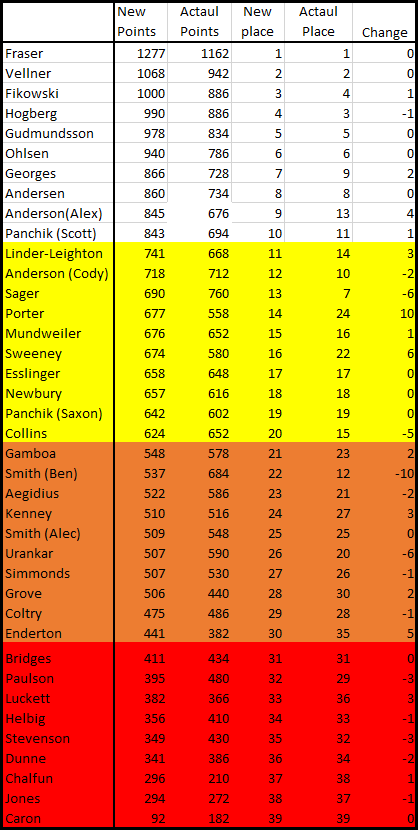 Overall, the top athletes did as expected. And other than a few spots up or down, the new scoring did not change the outcome that much from last year. Of course, adding 100 more athletes to the mix could create an upset or an athlete missing the cut early.

Event 1 begins Thursday morning at 11am. Stay tuned to The Barbell Spin as we will be in Madison covering the event.