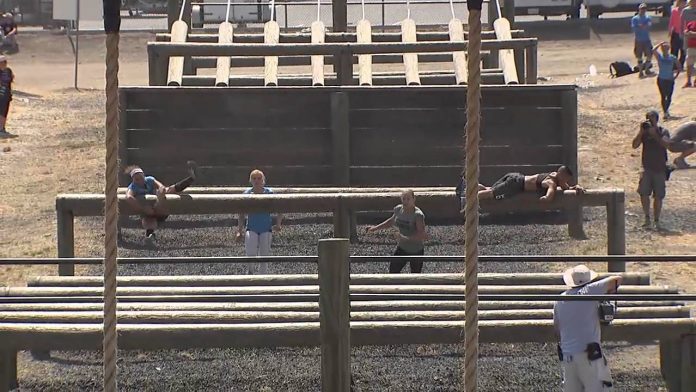 The obstacle course is making a comeback at the 2017 CrossFit Games. Sunday night Dave Castro announced on social media that CrossFit is designing their own obstacle course that will test the athletes in Madison.

With three hints so far, things are looking eerily similar to the 2012 CrossFit Games. While the events are different, they will include similar elements: running, swimming, biking and now and obstacle course.

In 2012, the individual athletes spent the Wednesday of the CrossFit Games at Camp Pendleton. The morning started off with a triathlon that was unlike any other triathlon. It featured a 700-meter swim, an 8-kilometer bike ride on uneven terrain including soft sand and an 11.3-kilometer run through Camp Pendleton’s mountains, including Microwave Mountain.

The event crushed many athletes, leaving them in bad shape for the next event, the O-Couse at Camp Pendleton. Athletes like Chris Spealler and others almost dropped out of the competition following the event it was so difficult.

After a bit of a delay to let the athletes recover, they began an elimination-style tournament on Camp Pendleton’s O-Course. The fast and furious course required skill, speed and agility to make it through the obstacles in their way.

Spencer Hendel would end up taking the event win over Kenny Leverich, Rich Froning and Pat Burke in the finals. On the women’s side, Talayna Fortunato bested Jaime Gold, Annie Thorisdottir and Kristin Clever.

As mentioned earlier, Castro announced that the CrossFit Games will have their own custom designed obstacle course. Reebok and Spartan Race inked a partnership agreement in 2013, which might mean that Joe DeSena and the Spartan Race team are involved in bringing this to life.

With a festival feel and plenty of space on the grounds of Alliant Energy Center, we are hoping that the obstacle course will be in front of a crowd to add to the excitement of the event. And while five years ago only the individual athletes took part in the triathlon and obstacle course, we already know that all divisions will be doing the “Run-Swim-Run” event and that Castro has alluded to more divisions taking on this year’s obstacle course.

Our guess is that Thursday morning the athletes will all start with the Run-Swim-Run event and that the obstacle course will begin later that morning or afternoon. Of course, we are just guessing as we only have three vague hints at this point.